Max ventures beneath the seabed, where he must battle Shredder the Spider Droid Spectron, the Sea Ghost City, is in danger! The wicked Professor has unleashed another of his menacing Robobeasts. Far beneath the waves, Max's Quest grows ever more challenging as he encounters mythical sea creatures. Max and his friends have already fought off three terrible Robobeasts. Now they face the ultimate battle, as the evil Professor tries to use Mangler the Dark Menace to destroy the ocean worlds! A new terror has struck Planet Nemos - wicked pirate Cora Blackheart and her crew!

Worse still, Cora is in league with the evil Professor and his terrifying Robobeasts Max and Lia must stop the pirates getting the keys to a deadly weapon and seizing power! Max and Lia travel to the frozen wastes of Arctiria, where they must tackle fiendish Nephro the Ice Lobster and stop Cora Blackheart's pirate crew taking control of the oceans.

But could this treacherous landscape prove deadly for our brave heroes? It will take all of Max and Lia's bravery and daring to tackle the latest terror of the oceans, as they struggle to foil the pirates' wicked plans. Will this Quest be a step too far? The fight against pirate Cora Blackheart and her crew reaches its thrilling conclusion.

As they face the deadly Ocean Hammer, can our heroes deliver justice and restore harmony to the seas?


Danger strikes once again for Max and Lia when they become trapped in the infamous Lost Lagoon. Legend tells that there's no escape - but could tackling another of Cora Blackheart's Robobeasts hold the key? Max and Lia must build a compass to help them escape to safety from the Lost Lagoon. But in this enchanted place nothing is as they expect, and the Robobeasts are deadlier than ever!

A new terror is in store for Max and Lia as they hunt for the third precious element that could save them. Horvos the Horror Bird is here, with flamethrowers on its wings! Max and Lia are trying to escape the Lost Lagoon How will they evade the poisoned spines of Gubbix the blowfish? Max and Lia travel to the Sumaran settlement of Astar, which is under attack from a movingcity of inhabitants from the Primeval Sea. The wicked pirate Cora Blackheart is on the loose again, and this time she's stolen the precious Arms of Addulis from Sumara.

A new Sea Quest is in store for Max and his friend Lia in this double helping of undersea adventure! Max and Lia are on the trail of a fiendish pirate, Red Eye, who plans to steal four ancient Merryn treasures, when they meet a monstrous walrus Robobeast. A precious Merryn treasure map has been stolen, and it becomes clear that the dreaded pirate Red Eye is involved.

But who is Red Eye, and what will happen if he finds all four treasures? Max and Lia must stop him! Max and Lia face a mighty combined enemy, as Siborg's latest Robobeast joins forces with his slave army! Deep below the seas of Planet Nemos, a monstrous creature has come back to life with terrifying new robotic additions.

The city of Aquora has been infested with a plague of tiny robots that are controlling people's minds. Max won't stop until the crazed computer is defeated, and he gets the final element to save Aquora. Can Max and Lia defeat Veloth the Vampire Squid, and return the four elements that power Aquora before the whole city dies of thirst?

Max and Lia's underwater adventures continue, as a terrifying new set of Robobeasts is unleashed in the oceans of Planet Nemos. An evil wizard has enchanted the magical beasts of Avantia. Is Tom the hero Avantia has been waiting for? Epos the Flame Bird is said to be the most terrifying of the Beasts - can Tom free her from her enchantment and save Avantia?

Will Tom survive an underwater battle with Zepha the Monster Squid and collect the first piece of armour? Tom's quest to collect the golden armour takes him to his home village, which is being terrorised by Soltra the Stone Charmer. Join Tom as he journeys into the deadly heat of the desert, where he must do battle with Vipero the Snake Man Tom's quest to free the good Beasts takes him to the tunnels under Malvel's castle, where Sting the Scorpion Man is waiting Taladon the Swift has returned!

At night, the Dead Wood comes alive with wild animals made ferocious by the spell of Luna the Moon Wolf. The volcano at Stonewin is frozen over and the lands are blasted with a deadly cold. Can Tom defeat Blaze the Ice Dragon? Fearsome Trema lurks in the bowels of the earth, only emerging to feast on his prey so Tom must brave the underworld. Tom now seeks the second potion ingredient that will free his ailing mother from Wizard Velmal's fiendish sorcery. 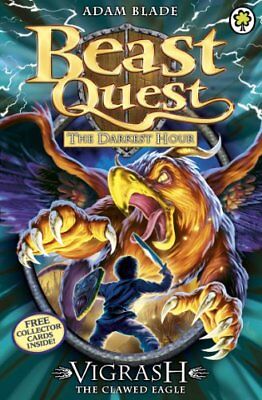 The land of Kayonia is descending into chaos! Everywhere Tom looks he sees decay and destruction: all the work of Wizard Velmal. Kayonia's forests are deathly silent - the animals have disappeared and no one dares set foot among the trees.

A ravenous Beast terrorises the windswept plains of Tavania: Madara the Midnight Warrior is on the prowl! The land of Tavania slips further towards ruin as portals rip the sky and terrible Beasts roam the land. Tom and his companions are faced with a new menace! Hecton the Body Snatcher is prowling the land, feeding on his victims' flesh. Koraka was a gentle shepherdess until evil Wizard Malvel transformed her into a hideous winged Beast! Malvel's evil knows no bounds!

He has used his dark magic to turn Elenna's faithful wolf, Silver, into a terrifying Beast. Tom's Quest reaches a terrifying climax! Tom thinks he has defeated his enemy, Evil Wizard Malvel. But he is wrong! Tom must first face Noctila the Death Owl!


Malvel wants revenge on Tom! The Evil Wizard is using the ancient spirits of Avantian heroes to conjure bloodthirsty Beasts. Something horrible lurks in the Yellow Marshes! Malvel has created Lustor the Acid Dart to fight Tom and his faithful companions. The Good Beast Sepron is in danger! Malvel has sent Voltrex - a hideous Octopus-Beast - to kill him.

Malvel has created another ferocious Beast for Tom to battle! Tecton is a massive creature that even Tom might find hard to defeat. If Tom does not save him, Avantia is doomed. A new evil enemy and dangerous realm await Tom on his new Beast Quest. Elko Lord of the Sea has risen from the waves to wreak havoc.

Can Tom overcome this deadly peril? Something terrible is hiding under the sands of the desert! Tarrok the Blood Spike is waiting for the hero Tom and his companion Elenna, so he can unleash his fury on them! Will Tom survive? Tom must do battle with a ravening, winged hound who thirsts for his blood!

Can the Avantian hero overcome her fearsome heat and douse her flames? Kensa the Sorceress seeks to overthrow Avantia and become a cruel ruler - and she has created six Evil Beasts to do her bidding. It's up to Tom and his faithful companions to defeat them! Avantia is in deadly peril! Kensa the Sorceress's most deadly Beast has been unleashed, and only Tom and his friends stand in his way!

Will they prevail, or will they be crushed under his hooves? Join the hero Tom on a high-action adventure with terrible Beasts and deadly danger! Tom is about to embark on his biggest Quest yet! Tom's first deadly challenge is to defeat Solak, Scourge of the Sea. More deadly danger! Adam Blade was born in Kent, England. As a boy, Adam spent days imagining who could have first owned the sword and shield. Eventually, he created a character — Tom, the bravest boy warrior of them all.